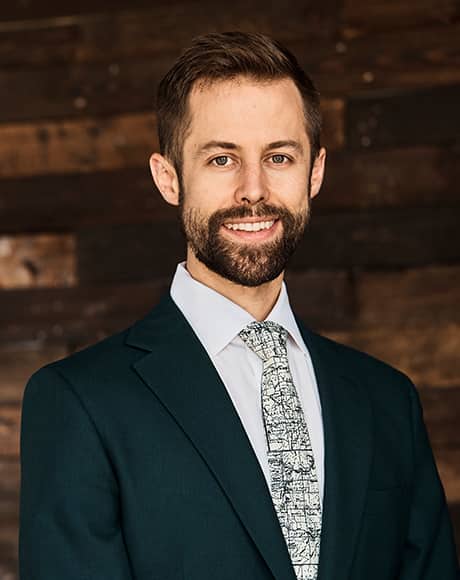 Sean was most shaped by his tenure as a student attorney in CU Law School’s Defense Clinic. The Defense Clinic gave Sean the opportunity to represent clients with limited financial means for free, including those facing combinations of both criminal and immigration charges.

If you ask Sean why he does personal injury work, this is the story he tells:

You know, I guess I’ve been picking fights with bullies since I was a kid. I was riding the bus home one day in middle school, and I saw another boy picking on someone about half his size. So, I stood up and told him what I thought of what he was doing. When we got off at our stop, he made it clear to me that we were going to have a fight about it. He was about a head taller than me. I don’t think I won, but I did get him to go away and leave us alone. That was a scary moment for me. But I’ve always been glad I spoke up.

About 20 years later, Sean is picking fights to help people who’ve been hurt due to the irresponsible acts of others. He’s accepted clients who were rejected by multiple other lawyers, brought their cases to trial, and won against long odds. He’s advised his clients to reject unjust settlement offers from some of the world’s largest and most powerful companies and forced those companies to pay far more than they said they would. In 2017, he helped a single mom who was permanently injured get justice from one of the largest grocery store chains in the country. The company offered only $250,000. Sean and his team obtained a jury verdict of $1.77 million. The case settled for $2.1 million after Sean and his team asked the court to add interest and costs and to increase the damages caps.

Sean’s willingness to fight means his clients often don’t have to. Sean and his team of Thornton personal injury lawyers recently tried a case against a large insurance company and secured a judgment for hundreds of thousands of dollars – almost triple what the company offered to pay. That company now offers Sean’s other clients fairer settlements.

Sean and his team help people who have been injured in car, bike, vehicle vs. pedestrian, motorcycle, and truck accidents; people injured because of negligent property design, property cleaning, or property maintenance; people injured by dangerous products of all different categories; and people with a multitude of other types of personal injury claims.

Sean has also dedicated himself to helping improve the chances of personal injury victims throughout Colorado. He has accepted multiple invitations to speak about trial techniques at statewide meetings of the Colorado Trial Lawyers’ Association and other groups. He has testified in favor of fairer personal injury laws at the Colorado State Legislature. He loves working with other personal injury lawyers to help their clients achieve full justice, whether it’s talking through complex issues over the phone, sharing data about defense “expert” witnesses, or joining trial teams on tough cases as co-counsel.

But our job isn’t just about the results – our clients have often lost so much more than just the cost of their medical bills or the wages they couldn’t earn because they were hurt. Everyone at Dormer Harpring strives to live a balanced, full life because that’s what allows us to empathize with what our clients are going through. For Sean, the most important things in life are family, the mountains, and music. Sean was born and raised here in Colorado. He cherishes spending time with his wife and their dog and two cats. He loves to do just about anything in the mountains, from rock climbing, mountain biking, and skiing, to fly fishing, hiking, backpacking, and camping. He enjoys riding and working on his motorcycle. He likes to play his guitar and sing, but mostly just to himself.